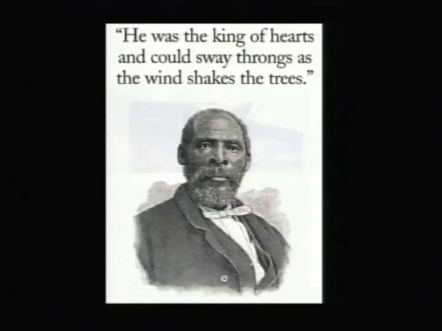 (From the book “John Jasper, the Unmatched Negro Philosopher and Preacher” by William E. Hatcher)

LET us bear in mind that at the time of his conversion John Jasper was a slave, illiterate and working in a tobacco factory in Richmond. It need hardly be said that he shared the superstitions and indulged in the extravagances of his race, and these in many cases have been so blatant and unreasonable that they have caused some to doubt the negro’s capacity for true religion. But from the beginning Jasper’s religious experiences showed forth the Lord Jesus as their source and centre. His thoughts went to the Cross. His hope was founded on the sacrificial blood, and his noisy and rhapsodic demonstrations sounded a distinct note in honour of his Redeemer.

Jasper’s conviction as to his call to the ministry was clear-cut and intense. He believed that his call came straight from God. His boast and glory was that he was a God-made preacher. In his fierce warfares with the educated preachers of his race,–“the new issue,” as he contemptuously called them–he rested his claim on the ground that God had put him into the ministry; and so reverential, so full of noble assertion and so irresistibly eloquent was he in setting forth his ministerial authority that even his most sceptical critics were constrained to admit that, like John the Baptist, he was “a man sent from God.”

And yet Jasper knew the human side of his call. It was a part of his greatness that he could see truth in its relations and completeness, and while often he presented one side of a truth, as if it were all of it, he also saw the other side. With him a paradox was not a contradiction. He gratefully recognized the human influences which helped him to enter the ministry. While preaching one Sunday afternoon Jasper suddenly stopped, his face lighted as with a vision, a rich laugh rippled from his lips while his eyes flashed with soulful fire. He then said, in a manner never to be reported: “Mars Sam Hargrove called me to preach de Gospel–he was my old marster, and he started me out wid my message.” Instantly the audience quivered with quickened attention, for they knew at once that the man in the pulpit had something great to tell.

“I was seekin’ God six long weeks–jes’ ’cause I was sich a fool I couldn’t see de way De Lord struck me fus’ on Cap’tal Squar’, an’ I left thar badly crippled. One July mornin’ somethin’ happen’d. I was a tobarker-stemmer–dat is, I took de tobarker leaf, an’ tor’d de stem out, an’ dey won’t no one in dat fac’ry could beat me at dat work. But dat mornin’ de stems wouldn’t come out to save me, an’ I tor’d up tobarker by de poun’ an’ flung it under de table. Fac’ is, bruthr’n, de darkness of death was in my soul dat mornin’. My sins was piled on me like mount’ns; my feet was sinkin’ down to de reguns of despar, an’ I felt dat of all sinners I was de wust. I tho’t dat I would die right den, an’ wid what I supposed was my lars breath I flung up to heav’n a cry for mercy. ‘Fore I kno’d it, de light broke; I was light as a feather; my feet was on de mount’n; salvation rol’d like a flood thru my soul, an’ I felt as if I could ‘nock off de fact’ry roof wid my shouts.

“But I sez to mysef, I gwine to hol’ still till dinner, an’ so I cried, an’ laffed, an’ tore up de tobarker. Pres’ntly I looked up de table, an’ dar was a old man–he luv me, an’ tried hard to lead me out de darkness, an’ I slip roun’ to whar he was, an’ I sez in his ear as low as I could: ‘Hallelujah; my soul is redeemed!’ Den I jump back quick to my work, but after I once open my mouf it was hard to keep it shet any mo’. ‘Twan’ long ‘fore I looked up de line agin, an’ dar was a good ol’ woman dar dat knew all my sorrers, an’ had been prayin’ fur me all de time. Der was no use er talkin’; I had to tell her, an’ so I skip along up quiet as a breeze, an’ start’d to whisper in her ear, but just den de holin-back straps of Jasper’s breachin’ broke, an’ what I tho’t would be a whisper was loud enuf to be hearn clean ‘cross Jeems River to Manchester. One man sed he tho’t de factory was fallin’ down; all I know’d I had raise my fust shout to de glory of my Redeemer.

“But for one thing thar would er been a jin’ral revival in de fact’ry dat mornin’. Dat one thing was de overseer. He bulg’d into de room, an’ wid a voice dat sounded like he had his breakfus dat mornin’ on rasps an’ files, bellowed out: ‘What’s all dis row ’bout?’ Somebody shouted out dat John Jasper dun got religun, but dat didn’t wurk ‘tall wid de boss. He tell me to git back to my table, an’ as he had sumpthin’ in his hand dat looked ugly, it was no time fur makin’ fine pints, so I sed: ‘Yes, sir, I will; I ain’t meant no harm; de fus taste of salvation got de better un me, but I’ll git back to my work.’ An’ I tell you I got back quick.

“Bout dat time Mars Sam he come out’n his orfis, an’ he say: ‘What’s de matter out here?’ An’ I hear de overseer tellin’ him: ‘John Jasper kick up a fuss, an’ say he dun got religun, but I dun fix him, an’ he got back to his table.’ De devil tol’ me to hate de overseer dat mornin’, but de luv of God was rollin’ thru my soul, an’ somehow I didn’t mind what he sed.

“Little aft’r I hear Mars Sam tell de overseer he want to see Jasper. Mars Sam was a good man; he was a Baptis’, an’ one of de hed men of de old Fust Church down here, an’ I was glad when I hear Mars Sam say he want to see me. When I git in his orfis, he say: ‘John, what was de matter out dar jes’ now?’–and his voice was sof’ like, an’ it seem’d to have a little song in it which play’d into my soul like an angel’s harp. I sez to him: ‘Mars Sam, ever sence de fourth of July I ben cryin’ after de Lord, six long weeks, an’ jes’ now out dar at de table God tuk my sins away, an’ set my feet on a rock. I didn’t mean to make no noise, Mars Sam, but ‘fore I know’d it de fires broke out in my soul, an’ I jes’ let go one shout to de glory of my Saviour.’

“Mars Sam was settin’ wid his eyes a little down to de flo’, an’ wid a pritty quiv’r in his voice he say very slo’: ‘John, I b’leve dat way myself. I luv de Saviour dat you have jes’ foun’, an’ I wan’ to tell you dat I do’n complain ’cause you made de noise jes’ now as you did.’ Den Mars Sam did er thing dat nearly made me drop to de flo’. He git out of his chair, an’ walk over to me and giv’ me his han’, and he say: ‘John, I wish you mighty well. Your Saviour is mine, an’ we are bruthers in de Lord.’ When he say dat, I turn ’round an’ put my arm agin de wall, an’ held my mouf to keep from shoutin’. Mars Sam well know de good he dun me.

“By dis time Mars Sam’s face was rainin’ tears, an’ he say: ‘John, you needn’ work no mo’ today. I giv’ you holiday. Aft’r you git thru tellin’ it here at de fact’ry, go up to de house, an’ tell your folks; go roun’ to your neighbours, an’ tell dem; go enywhere you wan’ to, an’ tell de good news. It’ll do you good, do dem good, an’ help to hon’r your Lord an’ Saviour.’

“Oh, dat happy day! Can I ever forgit it? Dat was my conversion mornin’, an’ dat day de Lord sent me out wid de good news of de kingdom. For mo’ den forty years I’ve ben tellin’ de story. My step is gittin’ ruther slo’, my voice breaks down, an’ sometimes I am awful tired, but still I’m tellin’ it. My lips shall proclaim de dyin’ luv of de Lam’ wid my las’ expirin’ breath.

“Ah, my dear ol’ marster! He sleeps out yonder in de ol’ cemetery, an’ in dis worl’ I shall see his face no mo’, but I don’t forgit him. He give me a holiday, an’ sent me out to tell my friends what great things God had dun for my soul. Oft’n as I preach I feel that I’m doin’ what my ol’ marster tol’ me to do. If he was here now, I think he would lif’ up dem kin’ black eyes of his, an’ say: ‘Dat’s right, John; still tellin’ it; fly like de angel, an’ wherever you go carry de Gospel to de people.’ Farewell, my ol’ marster, when I lan’ in de heav’nly city, I’ll call at your mansion dat de Lord had ready for you when you got dar, an’ I shall say: ‘Mars Sam, I did what you tol’ me, an’ many of ’em is comin’ up here wid da robes wash’d in de blood of de Lam’ dat was led into de way by my preachin’, an’ as you started me I want you to shar’ in de glory of da salvation. ‘An’ I tell you what I reek’n, dat when Mars Sam sees me, he’ll say: ‘John, call me marster no mo’; we’re bruthers now, an’ we’ll live forever roun’ de throne of God.’ ”

This is Jasper’s story, but largely in his own broken words. When he told it, it swept over the great crowd like a celestial gale. The people seemed fascinated and transfigured. His homely way of putting the Gospel came home to them. Let me add that his allusions to his old master were in keeping with his kindly and conciliatory tone in all that he had to say about the white people after the emancipation of the slaves. He loved the white people, and among them his friends and lovers were counted by the thousand.

The complete book is available at https://docsouth.unc.edu/church/hatcher/hatcher.html

Christian. Born-again. Baptized. Loves the Lord Jesus Christ. Loves to testify about Christ on the Internet.
View all posts by Tebeth →
This entry was posted in Uncategorized. Bookmark the permalink.