WHY CALVINISM IS A CULT 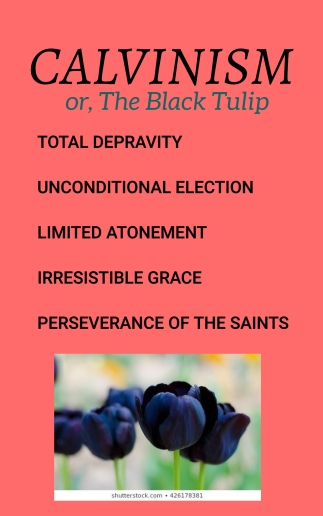 Calvinism is a cult for many reasons. Cult-like behavior is always marked by an idolatrous attachment to the cult itself. You will not find every Presbyterian or Reformed Baptist to be mired down in the cult-like behavior of Calvinism. Many people attend Calvinistic churches for reasons other than Calvinism and such members place little emphasis on Calvinism itself. It is those people who have committed themselves to five-point TULIP Calvinism who are mired in this cult.

Calvinists like to claim that all other theological systems are false. Calvinists have beliefs similar to the early Gnostics, who believed “the elect” were those ‘chosen-ones’ who had the secret knowledge of God. They believe that anyone who does not accept Calvinism must be a ‘non-elect’ and ‘non-regenerate’ person. If you observe a Calvinist carefully, you will see that he has little regard for the true meaning of the Bible message. The only message he will allow or accept is the message of Calvinism. All Biblical passages are run through the Calvinist mill. Any passage which seems to run contrary to his doctrine is  ‘reworked’ to fit into his system. Like all cults, the Calvinist will not change his beliefs under any circumstances. Rather than conforming his beliefs to the Bible, the Calvinist tries to conform the Bible to his beliefs. Instead of trying to understand what the Bible really says, he first asks himself how any given passage might impact Calvinism. Then, instead of honestly trying to understand the intended message of any given passage, he develops an interpretation that will suit Calvinism. Thus all interpretations are ‘custom-fit’to suit Calvinism.

The Calvinist serves his belief system and to him the Bible must be interpreted to conform to his belief system. All interpretations of the Bible are subject to doctrines of Calvinism. For example, in the gospel of John, Calvinists interpret the word “world” in John 1:29 and John 3:16 to mean “the elect” or ‘chosen-ones’ (they use the word ‘predestinated’). But at John 17:9, they interpret the word “world” to mean “other than the elect.” Therefore, they give the same word ‘world’ (Greek kosmos), totally opposite meanings from one passage to the next. There are myriads of examples in Calvinism just like this one.

Ordinary Christians do not have such a rigid 5-point system. If a Bible passage comes up that impacts their present beliefs, such Christians will change their beliefs to conform to the Bible. Not so with a Calvinist. The Calvinist (like the Mormon and Jehovah’s Witness) serves his rigid belief system and no Biblical passage is going to change his mind.

The purpose of reading the Bible is to find out what it says and arrive at the intended meaning through understanding the context, the grammar and following accepted objective principles of interpretation. Most people read the Bible to discover the treasures therein, but not the Calvinist. He uses the Bible only to make it suit or ‘custom-fit’ his rigid 5-point brand of Calvinism.

Calvinists do not try to coherently piece the ideas in the Bible together to arrive at the big picture. Rather, they pick up passages that suit them best and either ignore or rework all other passages which do not endorse Calvinism. They gather together a bunch of passages and build for themselves a rigid cult-like doctrinal belief system (called TULIP) which is to their liking. In short, they create their own god, an idol called Calvinism.

Many people would say this language is too strong to describe Calvinism. At one time I would have said so myself. But having studied and observed Calvinists for thousands upon thousands of hours, it is my solemn conclusion that Calvinism is a very dangerous cult and falls into the same bracket of cults like Jehovah’s Witnesses and Mormonism. Do not let the fact that they accept regular doctrines like the Trinity and the Deity of Christ fool you either. Observe their behavior in church circles, in theological debates and especially on social networking sites and you will see how correct are my observations that Calvinism is indeed a blinding and life-choking CULT.

(Adapted from an article on Angelfire.com. http://www.angelfire.com/realm/raised-to-life/Articles/Cult.html)

Christian. Born-again. Baptized. Loves the Lord Jesus Christ. Loves to testify about Christ on the Internet.
View all posts by Tebeth →
This entry was posted in Uncategorized. Bookmark the permalink.

39 Responses to WHY CALVINISM IS A CULT